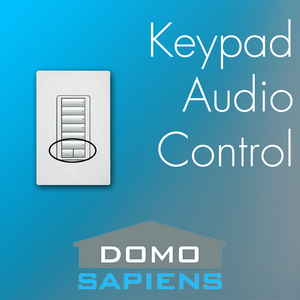 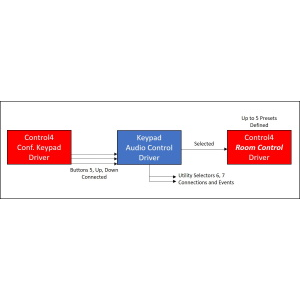 This driver enables you to fully control the Audio in a room with only two button slots used on your Control4 Configurable Keypad or Keypad Dimmer.  The remaining slots (up to four) may still be used for lighting or other purposes.

Specifically, when used jointly with the free Control4 Room Control driver, the following functions are available:

When connected to Control4 keypad buttons 5/Up/Down and used jointly with the free Control4 Room Control driver in a given room, this driver allows you to very effectively control audio in the room.  In addition, up to two other Utility devices may be controlled.  Using proprietary Domosapiens technology, the driver is able to simulate an 8th key, achieved when both Up and Down are pressed simultaneously.

Button 5 of the Control4 keypad is used as a Selector button with LED feedback.  The user simply presses the Selector until the desired selection is reached (corresponding LED color).  If the selection is an audio Preset, the driver will turn the room On, if required, and select the Preset.  Capturing audio from another room has the same effect.  The Up/Down buttons are then available to pulse the volume Up or Down or ramp the volume when held.  If the Up and Down buttons are tapped simultaneously, the room is muted (unmute by pulsing the Up or Down button).  If both Up and Down buttons are pulsed simultaneously again (when the room is muted) or when they are held for more than 2 seconds, the room is turned Off.

Following the Preset/Capture selections, button 5 may also select one or two Utility devices (with specific LED colors).  In this case, the Up/Down buttons (including simultaneous pressing of both) may be used to control a device such as a shade, for example, or a garage door.  For shades, Up and Down are obvious, but simultaneous Up/Down may issue a Stop command, which could be quite handy for the user.

A set of programming events are provided as well as variables containing the status of the selection.

Since many instances of this driver may be installed in a project (typically one per physical Control4 keypad), the driver provides Actions to broadcast selected colors to other instances as well as stopping blinking across all instances.  This can simplify installation and programming.