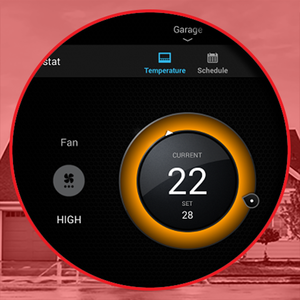 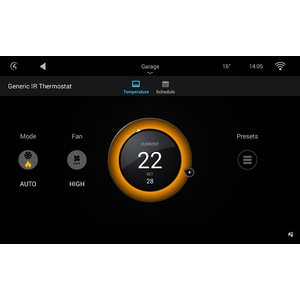 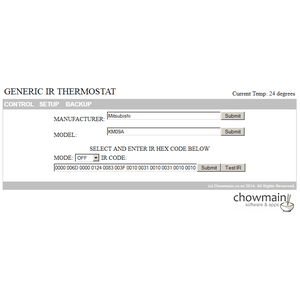 Split infrared controlled HVAC systems are quite common in Australia and New Zealand. The issue with these systems is that control is only one way, without any feedback what so ever. Furthermore each IR string contains code information about the mode, fan speed and set point within in. Given this you must learn every single combination of IR code to get full integration into your home automation system.

The Chowmain Generic IR Thermostat driver enables us to integrate infrared controlled HVAC systems into the Control4 system with feedback from a dry contact (to sense if it is on/off) and temperature input from the Control4 Thermostat, Axxess Motion Sensors, Card Access Contact Sensor or Relays.

The driver also provides the ability to preset and schedule.  This provides a total smart solution for what would be a one way system. Note this driver is only compatible with HVAC systems that utilize Celsius.

The two options we recommend for installation are as follows:

In both cases installation is recommended on the interior of the heat pump chassis to ensure a clean look. However if this voids the manufactures warranty a tidy exterior installation can easily be done.

This driver is extremely useful for countries where IR based HVAC solutions are common. By combining it with 3rd party temperature inputs you get a fully integration IR HVAC solution within Control4.

Are there any other cool things we can do with this driver?

This will work on all IR based HVAC systems. Note that a 3rd party IR learner is required to learn the codes. Temperature input is compatible with the Control4 Thermostat, Axxess Motion Sensor, Card Access Contact and Card Access Relay.

Where do i find IR backup files for existing systems?

Why do you only support OS 2.6 and above?

OS 2.6 offers a superior security encryption algorithm and a new and improved driver format. We have decided to only utilise this new format to ensure that the integrity of this driver is not compromised and that we can provide the best dealer/user experience available.

Control4 have advised us of a bug that effects control over IR based HVAC systems on EA controllers. They have created a patch to fix this issue for OS 2.8.2. This patch will be included in future versions of OS automatically. Please see knowledgebase article below if this effects you.

I want to try this driver out before buying it?
All Chowmain drivers for Control4 come with a 7 day trial.  Just add the driverCentral licencing driver and this driver and you're good to go.  No registration required.

Version #20160524 - 24-MAY-2016
Changed to single setpoint
Updated HVAC states to reflect what is happening.
Implemented Presets & Scheduling
Added ability to remove HVAC modes and Fan modes (useful for systems that only have Heat or Cool only)

Version #20160129 - 29-JAN-2016
Fixed issue with special heatmiser driver where it was listening into the wrong variable.

Version #20150407 - 07-APR-2015
Resolved issue where logs on 2.6 systems would fill out controller storage causing system stability issues. This only effects systems where people have set the debug logs to 'print and log' or 'log' and have forgotten about it over longer periods of time.